Random Hacks of Kindness (RHoK) 2.0 and the Open Data Hackathon Day (ODHD) was held December 4 – 5, 2010 in Toronto, Canada. It was our first Canadian RHoK. Toronto had 52 participants collaborated on eight projects. The RHoK team joined over 1000 participants in 20 cities while the ODHD team had participants in 73 cities. 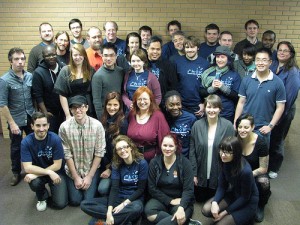 About the Toronto event

MVP for being a leader/mentoring folks: Jon Pipitone

Globalnews.ca joined us and wrote about the event.
Mark Kuznicki: Hacking for Good
Melanie Gorka: RHoKing out in Toronto

The full Toronto project from the RHoK wiki.

RHoK around the World

Here are some of the great highlights from RHoK:

Thanks again to all our RHoKto sponsors

Thanks again to the RHoKto core team

Special note of thanks to all the amazing Core team members: Mark Kuznicki, Meghann Millard, Sandi Jones, David Desko, David Black, Brian Chick, Melanie Gorka, Leila Boujnane and Christine Crowley. It was an awesome pleasure to make this happen with each of your amazing talents.