What kind of Internet do you want?

The Internet is our community garden, our public space and our workshop. Every day I work with people around the world who create maps and technology for good. A free and open Internet invites this collaboration beyond borders, religion, politics and societal barriers.

Crisismappers, particularly, conflict mappers do some of the bravest and scariest acts of Open Internet Activism. They take my breath away giving voice to the dispossessed, documenting atrocity and informing the world. Two such mapper groups are Syria Tracker and Women Under Siege Syria. Reports of a full communications shutdown in Syria takes away their voice. They should have the right to voice. We should protect their right to voice. What will the impact of this outage be on their important work?

Lauren Wolfe, Director of Women Under Siege, was interviewed a few months ago by the Canadian Broadcasting Corporation’s The Current (audio) about this project and their verification process. 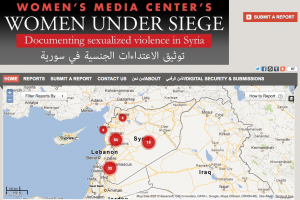 ****
The Syrian Internet shutdown was reported as I was writing this post about why the ITU and WCIT need to open their doors and not make decisions on behalf of the globe. More about this from the Mozilla andGoogle’s Take Action sites.

What kind of Internet do you want?

At Mozilla Festival, we remixed video with Mozilla Popcorn. You can Make your own ITU activism video. There is something magical about being able to remix our web and amplify our voices. Webmaking is the kind of Internet that #freeandopen encourages and supports. It is the type of community space that allows for more voices to be heard and to interact. Creating the web is supporting it to exist.

Security and the Internet

Today the CBC posted an article: “Should the UN Govern the Internet“. They interviewed Citizen Lab’s Ron Deibert about his thoughts:
“the recurring push at the ITU to wield more control over the web is part of a bigger trend “towards greater state control of cyberspace and an older internationally governed system of telecommunications.””

I’ve been much inspired by the work of Citizen Lab over the past year. They fight the good fight with data and analysis about security. And, they’ve provided Ushahidi and myself some valuable help as I work to guide people through various security questions with technology. We need to be very mindful about What kind of Internet we are accepting and what kind of Internet exists. Ron’s TEDxToronto talk should be mandatory for any activist and Internet user.

Internet access is a growing human right. Attending Annenberg-Oxford’s Media Policy Summer Institute gave me an opportunity to meet citizens from around the world who study, work or are activists for media policy. Learning first hand about walled gardens and the advocacy of this type of “Internet” provided much framing for what kind of Internet other people might want. It was a rich discussion which could use a deeper study. Why do people support a closed internet? Who are they?

Working and volunteering in a space of Internet and mobile activism for technology and maps for social good, I’ve collected a number of maps that range from sentiment and demand for access, infrastructure reports, power outages and even how SMS campaigns are being used for ICT4D. Each is a unique project, but they collectively show how we could potentially map voices/stories and use this data to analyze with layers of hard data. We need to find new ways to use our technical might to show where access is and provide the qualitative feedback for “why”.

Launching an global map for stories about access and benefits of a free and open Internet would be a mighty task needing more than a few strong people. Perhaps not this time without a little help from friends. With Random Hacks of Kindness this weekend, it might even be feasible to consider? The question is: How can a map unite our common cause for the Internet we want or, even, open a dialogue about the different versions of an Internet?

(At Ushahidi, I write frequently about our community of deployers who give voice around the world during times of crisis, for elections, and for civil society topics varied from corruption to environmental movements to human rights to violence against women. )

Share this Story
Previous: We’re RHoKing Toronto and Vancouver
Next: HOT membership and Board proposal