OpenUN and the Future of Real-Time at SMW

The age of real-time has changed media, humanitarian aid and my life’s path. I am a community manager and communications emergency/incident manager by trade who also volunteers with digital crisis response. Social Media Week has provided great opportunities to attend events in person or participate virtually. Today I am attending OpenUN and digging into how media and crisis response organizations work with open data, real-time data and digital media changes. The way we obtain news and participate in our local and global communities is evolving. It is exciting to have my career and volunteer work merge. And, also to have the chance to learn and engage online.

The United Nations GlobalPulse is participating in Social Media Week with “Open UN: Engagement in the age of Real-Time”. #openUN is livestreaming right now.

PSFK on Future of Real-Time trends

PSFK presented their trend analysis about the future of real-time, including the example app called mappiness:

PSFK posted, free for download, their UN report on The Future of Real-Time.

Robert Kilpatrick presented about UN Global Pulse and how they are working to embrace real-time information for development. He cited the opportunity for the use of citizen reporting and how the UN is researching how to collaborate with digital volunteers and communities of interest. Some of my favourite quotes from his keynote: 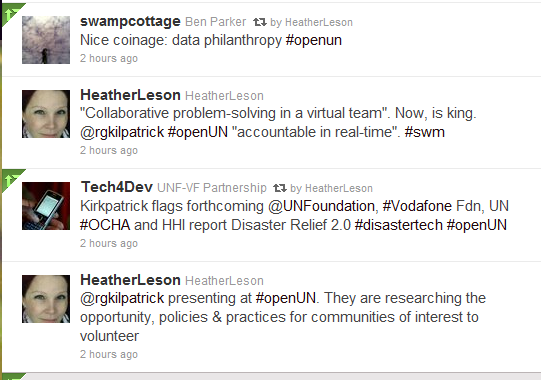 Graham Scott, editor of this.org, interviewed Brian Chick and myself about CrisisCommons.

“In this edition of Listen to This — the premiere of our second season of original interviews with Canada’s most fascinating activists, politicos, and artists! — we talk with Heather Leson and Brian Chick, two of the more senior Canadian coordinators of Crisis Commons, an international online community of people who use their technology skills to assist with disaster relief, crisis management, and humanitarian efforts around the world. Crisis commons was founded in Washington, D.C. in the spring of 2009, but has quickly spread to more than a dozen cities around the world, including hubs in Montreal, Toronto, and Calgary. We talked about the role technology can play in disaster relief scenarios, the group’s shifting identity as it assumes a more prominent role in the aid community, and the limits of online activism.”

Thanks for chatting with us Graham! It is a honour to be featured in the same space as some of Canada’s greatest thought leaders.