Do-more Disrupters: The People Behind the Stories

One spark and it happens: An individual or a team of people create a deployment using Ushahidi or Crowdmap. Their motivation and the inspiration are telling tales. These citizens, diaspora and a global community collaborate near and far to make change happen. Motivated often by the simple act of giving voice and building momentum for their ideas, most do so without payment.

Who are these deployers? One thing connects all of them irrespective of location or topic: They want to do more in their communities and world.

Ushahidi gives us a window into many varying disruptive movements, large or small: community members, from Syrian Tracker to Moroccan Elections Elections to Open Nuclear Iran mappers to Maps4aid.

Even children are trying to activate change outside the traditional methods or institutional structures: Amrita of Bangalore, India (8.5 years old) is a Trusted Food Reporter for the Cost of Chicken Project; kids from around the world are collecting data on local food conditions, from grade 8 students in San Francisco to grade 3 students in India; students are mapping to learn and collaborate about food production and food sustainability.

Software Centre, the Morocco-based team led by Tarik Nesh-Nash, started with election monitoring with Marsad.ma and is now mapping corruption. Boyan Yurukov created the Bulgarian award-winning 2011 crime.bg. He also developed and installed Fairelections.eu election mapping, which was moderated by the Institute for Public Environment Development.

These deployments are aimed at giving voice to fair democratic practices. Each of these deployers mentor new mappers sharing best practices or create additional tools, like Boyan’s Facebook app. By sharing their story, they’re beginning to inspire others to map elections or corruption.

Persistent outreach and storytelling are key to successful deployments. The Syria Tracker team is a collective of partnerships and volunteers, including some of our friends within the Crisismapping Network and the Standby Task Force. Over the past 286 days, they’ve mapped more than 6,300 deaths.

Melissa Elliot, left, is the Reports Coordinator for the StandBy Task Force.

Shemeer Babu is one mapper in India focused on highlighting the issue of violence against women with Maps4Aid. His next project is building out Blogs4Aid. His plan will be focused on using SMS (short message service) and maybe IVR (interactive voice response) since 90% of rural women in India don’t have smartphones. Both @maps4aid and @syriatracker use Twitter on a daily basis to keep their map story alive and in the minds of their followers, using free online resources to augment their story.

Melissa Elliot is a core team member and reports coordinator of the StandBy Task Force. This week she attended a Canadian government event to share the story of Crisismapping and volunteers. Her constant drive to make a difference in the world inspired officials to consider their first-ever Crisismapping Simulation. As a leader in a growing community that often uses Ushahidi, she is one of over 750 volunteers who map information for emergencies.

How can you help?

Every day deployers need support to build their projects. For example, Open Nuclear Iran needs a banner for its Crowdmap; Shemeer needs a hand determining how to grow his local project to a larger sustainable Blogs4Aid initiative; the Corruption Tracker and the Harassmap teams are looking for more volunteers to support their long-term projects.

These people often use Ushahidi’s software in their spare time with no to low funding. They are the so-called “do-more disrupters.” Mentoring and help matchmaking are core to these deployers’ ongoing efforts.

We’re launching a new wiki space to assist our existing Community Connect with people who may be able to help. To find out more about this, join our community site or follow our Ushahidi blog. Who knows how you will inspire and be inspired to actively do more in your community and the world!

Volunteering is a gift. For the past year, I have been part of the CrisisCommons – Global Core Team as the co-lead of the Community Working Group. We grew the community from US, Canada, UK and New Zealand to other events and volunteers in Australia, France, Thailand, Belgium and others. I volunteered on efforts for Haiti, Chile, Pakistan, New Zealand and Japan. I contributed to the writing of the content for the CrisisCommons Sloan Foundation Grant, especially the city and project profiles.

A number of reports about Volunteer Technical Communities have been released in the past weeks. They really speak volumes about how each individual volunteer and group changed the world. I am proud to be part of all these movements. We are friends and partners in leadership and volunteerism. 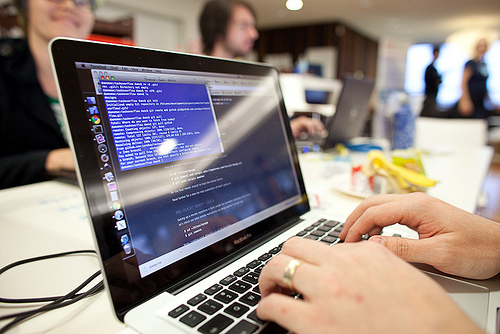 Today, I made the following announcement on the CrisisCommons global and CrisisCamp Toronto mailing lists:

Morning everyone, Hope your weekend was grand.

For the past year, I’ve been your CrisisCommons Global – Community Working Group co-lead. And, what an adventure it has been. I will be stepping down from this volunteer role effective April 4, 2011. With this change, I will transition my responsibilies to Chad Cataccchio, who is a co-lead of this group. He sent a call to action for the Community Working Group yesterday.

One of the big lessons learned about CrisisCamps is preparedness. I believe in this community and will continue to volunteer as the CrisisCommons/CrisisCamp Canada lead and CrisisCamp Toronto lead.

I am honoured and proud to have volunteered in this role. I will continue to play a part within the global community when and where I can.

I will continue to volunteer on a number of projects including: