Open in Protest and Crisismapping

Protest and Crisismapping are intertwined with voice. I think conflict mappers, videographers, data analysts and storytellers are incredibility brave and important to our future. But, local knowledge, local language and local context must guide decisions. There are some tough questions to ask about what should be openly shared or why not have something as open data?

Videos, imagery layers, pictures, reports, maps, stories and datasets are used to both give voice and collect evidence on human rights violations. From the comfort of my home in Canada, I have not lived in times of civil war in Syria. I have not stood in the freezing cold in Kyiv alongside protestors. We can, in solidarity, write about it, share links online, become crisismappers (Digital Humanitarians), petition our governments, but for the most part, we are a world away. No matter how connected we are via the Internet, we can be equally disconnected.

At Info Activism Camp, I joined the protest salon. Speakers discussed their activism in various global contexts. You can download and watch the discussion, read the protest mini-magazine and listen to the protest soundtrack.

There is a big difference in marching down to Queens Park (Toronto) vs. trying to feed your friends in Taksim Square in Istanbul or keeping your friends safe in Brasil. The stories of people’s lives, their efforts to protect rights and collect evidence gave me a profound backdrop for how I observe the world. The videos and livestreams from Ukraine tell a story of another country’s people in protest. There have been over 3 million views for the video I am a Ukrainian. The first time I watched it I cried. On the second view, it hit me how powerful video and Internet remains. Then and now: I fear for their safety.

Talking with Brown Moses, Women Under Siege Syria, or Syria Tracker, I have come to learn about the tenacity of humans and potential of digital forensics. These projects and their leaders are the forefront of asking questions: what should be published or not published. Their verification methods for video, pictures and reports are mapping new ground. They work very closely with people in the affected regions alongside global helpers. Brown Moses is meticulous in his analysis of social media (how Facebook is destroying History), weaponery and videos. Lauren Wolfe has built the Women Under Siege project to give voice to women who suffer brutal violence in times of war. Her methods in research, journalism, online engagement and verification highlight how a map can be one corner of a larger, more extensive project. Both the Syria Tracker and Women Under Siege teams do not publish all the details outright. They review, debate, curate and anonymize. Brown Moses has a unique talent of identifying and teaching methodology. These digital skills show us how crisismapping has evolved. Evidence and data collection happens in real-time. People are using these tools to make decisions. This is the nature of data and information. And while data can and has been used as a commodity and a power device, these types of projects show focus on those we serve – the survivors and the affected.

“We struggle with this challenge, balancing between the imperative to do no harm with the virtues of transparency and openness.”

All of us seek information for evidence or even to help guide humanitarian decisions. This week First Mile Geo released it’s detailed case study on Aleppo complete with a set of open data. Collecting data about bakeries, locations and, potentially, movements in a conflict zone and then releasing that data will surely bring on questions. But, the First Mile Geo is already asking them with us:

Matt McNabb: But the principles underlying open data have their limits in conflict-affected areas, where the contest of information can –and often does –emerge more frequently to support actions that may have a deleterious effect on citizens’ safety or well being. Perhaps obvious to say, data in war can be a dangerous thing.

I firmly believe that the next future of open data is collected by citizens for whom the data is about rather than only stored in a government or business sanctioned data portal. We need both. The success or failure of Open Data will happen in the “majority world” (or as others call it the Global South or Developing world.) It is great to have Open Data events in over 110 places around the world on Open Data Day. One day is a start, but I think the penetration of Open Data will only happen if it follows the lead of OpenStreetMap. People need to be involved at a local level. Simply put: people don’t trust government and want to be part of the process (have agency over their data.) So, it is with this that I think methodology of First Mile Geo is at the forefront of combining offline community engagement (paper and pen) tied with maps to build local help. Crisismapping shows us that the raw questions alive in the field and being shared openly by folks like the First Mile team, Brown Moses, Syria Tracker and Women Under Seige. We need to consider what they have learned and how it can apply in conflict, crisis or developing areas.

What does it mean to be “open” and “collaborative” in a conflict or crisis zone? What does it mean for protestors? When does the affected population get a voice in what video/picture or imagery gets used and for what means? What are the new ethics for the digital crisis? In January of this year, I joined a round table and said: we need an imagery code of conduct (for satellites and drones). I advised them that we can’t wait for 4 years of research. This is happening now. People are being affected now and digital humanitarians are having these discussions now. I shared some of the example discussions we have had within the Humanitarian OpenStreetMap Team. As security analyst Bruce Schneier rightfully points out, location is being used and we need to prepare for the new level of privacy and security discussions. While we race to share, collaborative and open up information, we need to build stronger data guidelines and data training.

Please go to: RightsCon and Responsible Data Forum to talk among peers. I’ll be watching via the Internet trying to catch snippets.

(Cross-posted from the Ushahidi blog)

Deep in the mountains of Italy, Centro d’Ompio, we sat in a circle brainstorming Cameras as Evidence. What would it take to collect a good and actionable citizen report using photos or video? Lead by Chris Michael of Witness, we discussed and brainstormed. The Witness team and some of the participants have amazing experience in building human rights cases. Inspired by the beautiful setting for Info Activism Camp, we collectively pulled out all the stops to consider how we can help activists and citizen reporters create valuable and usable content for their mandates. While our session aim was not tool specific (e.g.Ushahidi), it remains very applicable for Ushahidians: our software, our community. 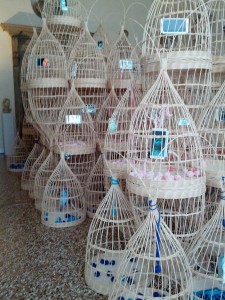 Some Ushahidi deployers use the power of rich media content, including video to give voice and document their projects. As we journey down the 3.0 road, we are thinking about how to improve.

The path to building 3.0 is very much considering how should categories be used and how can we make custom forms as flexible as possible. See our current discussion about the future of categories on the developers mailing list. This is a critical juncture, so you input will help us serve you better.

People are using both categories and custom forms to drive their data colletions missions. We’ve seen items that could be either a category or a custom form item. To be honest, I think that sometimes people use categories as work-around because custom forms have sometimes been buggy or are hard to use.

I will say that I am grappling with the different Ushahidi users – those who want to collect and analysis data and those who simply want to file a report. As you can imagine, this is a balance. Our community has discussed too many categories, very unclean/unclear data in the past.

If you are collecting videos and/or photos as part of an evidence-based project, here are some of the recommended data points to consider:

Alright, that list makes me contemplate: how are we going to incorporate this without scaring off reporters? How can we make video useful as part of the map mandate?

What do you think? What is missing? Do you think we should have a suggested custom form for video reports?

Thanks to Tactical Tech Collective for bringing us together to collaborate.

Information wants to be complex

(Cross-posted from the Ushahidi blog)

Questions lead to answers that lead to more questions. Tactical Tech Info Activism Camp has a number of tracks: Documentation, Investigation, Curation, and Beautiful Troublemakers. I joined the “microscopes are us” evidence team aka Documentation. We’ve spent the week in brain strain grappling with the nature of problem-solving, decision-making, ethics, analysis and documentation.

Our mighty facilitators built the sessions based on real projects and examples. Our community of participants infused it with their project examples. It is often within the scenarios that the rich detail inspires and challenges us. As one participant opined: “Information wants to be complex” and another stated: “Information sometimes has a force of will.”

What would you do?

Our Thursday discussion focused on Ethics in Documentation. These examples are about “personal identifying information” and “informed consent”. 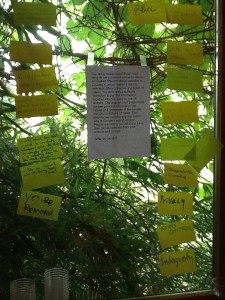 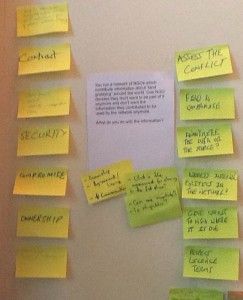 Questions and Statements from the Documentation Discussions

Each of us had various questions and alternate viewpoints:

How do organizations and individuals manage risk?
Moral decisions are circumstantial.
We are not longer gatekeepers of information.
Who’s data is it anyway?
Ethical decisions can change over time.
Sometimes you need to take a risk when conflicted on ethics.
Be prepared to defend and stick to a decision.
Information belongs to the person, not to us. Be responsible.
How can we make information powerful and use it to make change on the ground?

I suggest that we collectively create an Ethics toolkit to help keep the momentum of the discussion. As an output of this camp, I am creating further guidelines for using Ushahidi for our community. I will include ethical scenarios based on our work. This idea directly comes from my experiences here.

Thanks to all the participants and organizers.

Eddie, the peacock, is in the courtyard at Centro d’ompio. We are eating breakfast and getting ready for another day of learning and sharing. I’m at Info Activism camp with 138 other folks from 48 countries. Participatory sessions range from Documentation, Curation, Investigation and Beautiful Troublemakers. I’ve joined documentation because I want to focus on storytelling with purpose. Afternoons are full of skillshares. So far I’ve been in a PGP and digital security learn-in as well as a Data cleanup workshop getting regex 101. Sublime Text and I are are now friends.

Every day I send the Tactical Tech’s Security in a Box to community members. I’m here to polish up and learn new skills to keep on that journey. Global events really inspire me. We, the beautiful troublemakers, work around the world to connect humans and tech for social good. It is sometimes lonely path, so these times that we are together are precious from sunrise to sunset.