From Nairobi to Montreal via Sydney

Normally, travel from Nairobi to Montreal would route via Paris or London. What about information and collaboration? This weekend a Random Hacks of Kinds, I had the honour of making this connection via Sydney for Random Hacks of Kindness (June 5 – 6, 2010). 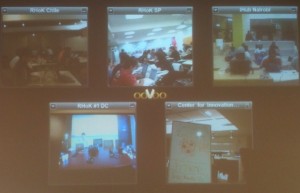 Crisis Commons Canada is young with two strong cities: Toronto and Montreal. One of the big projects from CrisisCamp Montreal is Haiti Amps. Kimberly Rouf worked tireless to build a relationship with Team Canada Healing Hands. Once she had the requirements, she coordinated with software developers to create a website and app that would allow amputee requests via SMS. Mobile phones are very prevalent in most countries and using this capability is a natural fit.

Haiti Amps was one of the featured Problem Definitions for Random Hacks of Kindness: RHoK1.0. Kimberly quickly ramped up her project wish list in preparation for potentially being selected by one of the RH0K city development teams. And, that very thing happened in Nairobi.

Early Sunday morning AEST, I was on oovoo (a video streaming platform) with the RHoK Nairobi folks. Linda Kamau asked me if I, as a Canadian Crisis Commons volunteer, knew anything about Haiti Amps and if I could help her reach Kimberly.

So, I Tweeted, emailed and Facebook’ed Kimberly and Lorraine Craig of CrisisCamp Montreal. Lorraine saw my tweet, called Kimberly in Montreal and asked her to join us on irc.rhok.org. This took about an hour of coordination. Nairobi had gone to sleep by then. Kimberley, Lorraine and I chatted on IRC. This is where the connection gets fun. Kimberley downloaded the oovoo software and attempted to log in. It failed as she needed the latest version of flash. She downloaded it. Meanwhile, I was trying to connect with Nairobi on oovoo to get Linda’s attention. The oovoo sound was muted in Nairobi and it appeared that people were sleeping at the venue. They were literally hunched over their computers. We set up a white board in front of the video camera to try to get their attention: “Nairobi, call Sydney or join us on IRC.”

Meanwhile, Kimberly was able to log into oovoo but there was a problem with the video and it kept crashing her computer. We elected to just try the oovoo chat. This worked. Great, Montreal online with Sydney. Now, we just needed Nairobi.
Fortunately, one of the Nairobi folks saw our white message board alert. We passed written messages on the white board.

Nairobi: Linda is away.
Sydney: We have Montreal on oovoo ready to talk about Haiti Amps.
Nairobi: I’ll look for her.
10 minutes pass
Nairobi: Linda is on her way. Can we skype?
Sydney: Sure, skype name please.

On IRC, I messaged Kimberly that we are going to switch from oovoo to IRC. Lorraine calls Kimberly as she appears to be offline after one and half hours of troubleshooting. Kimberly joins us on IRC. Linda joins us on IRC.

We have a RHok Connection: Nairobi to Montreal via Sydney on the same platform at the same time!

Kimberly and Linda decide to skype about the project. Here is some of the great results of this collaboration.

“I was talking to Linda and Charles in Nairobi a couple of hours ago. Charles and a couple of his confreres have taken on the registration process for Haiti Amps….. I’m going to Skype Nairobi again in a few hours. ”

As a Crisis Commons volunteer, I am so proud of our ability to work under pressure to collaborate and coordinate across multiple platforms, social networking tools and timezones. Every day I am awestruck by the power of the Internet and our community. This is just one example of the great work from RHoK 1.0.